How Marketing Has Fueled Growth in the Craft Beer Industry

In a market dominated by giant corporations with well-established brand-loyalty from their consumer base, it’s a shock that smaller breweries are able to edge their way in at all— let alone thrive. Yet the meteoric rise of craft beer continues. And while that is partially a result of more emphasis on quality brewing, it is also in no small part thanks to craft beer’s marketing. Uniqueness is the presentation of a centuries old industry through strategy, imagery, keywording and targeting when it comes to the success of the craft beer industry in the United States has revealed a whole new vibrant culture and a ravenous fan base.

A casual stroll through your local grocery store is enough for the difference to be clear. On the domestic side, you have simple packaging in red, blue, or gray. They don’t need fancy packaging. They just need their name—names that every American recognizes: Budweiser, Miller, Coors, etc.

But the craft beer section is a different story entirely. This section is a slew of colors, with names that not as many people know, but are certainly more fun like “ Hoptimus Prime .” Even more importantly, the packaging is often covered with that brand’s story. Jokes, backstories about their brewery, artwork—all of this and more is commonly found on a case of craft beer.

Stories are a powerful tool, and successful craft beer makers usually put a lot of effort into showing the consumer their story—their brand’s personality. What’s a more compelling narrative from a consumer perspective: “we are a small-town brewery from Washington, founded ten years ago by local curmudgeon One-Eyed Pete” or “your dad and his dad drank our beer, so you should too”?

Larger beer-producers do try to use some story-telling in their marketing (notably Sam Adams). However, the storytelling techniques used by craft beer makers is more effective to a degree because their stories are often tied in with their locality and utilize small business, pull-yourself-up-by-your- bootstrap themes.

Go to the Masses for Local Appeal 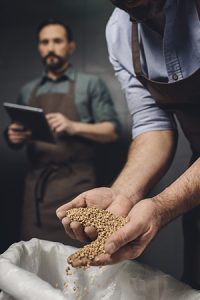 Many craft breweries develop symbiotic relationships with their local culture. Craft breweries will often integrate the name of their home city, landmarks, or culture into their marketing. As a result, any increase in advertisement for the city or for the brewery automatically brings attention to the other. Furthermore, by hosting local events at their business, craft breweries can secure a spot as community-builders. This creates a more personal tie between the business and the people.

This focus on grass-roots marketing is also evident in the type of media craft breweries use to advertise themselves. Traditional marketing mediums for the industry are often too expensive for a small company, and the new generation is watching less television and listening to less radio anyway. But this apparent issue is actually an opportunity in disguise for less pricey mediums such as blog posts and social media marketing. Such marketing is not only less expensive, but actually compliments successful craft beer branding. Like hosting community events at their venue, social media marketing allows a craft beer brewery to actually interact with their audience. And that approachability is exactly what many
people like about smaller brewing companies.

On that note, it is no surprise that Americans find a lot of appeal in thriving smaller businesses. Beyond the more personable, down-home quality of craft breweries, they also strike a chord with the public as underdogs. With a rise in monopolization of many industries across the board, it is refreshing to see a playing field where the little guys are making a great showing—and people want to support that.

Taking that line of thought even further, there is actually evidence that craft brewing is more beneficial to the common worker. According to a 2018 article in the Atlantic, despite a downward trend in sales for many of the largest beer producers, an overall rise in beer prices, and a drop in U.S. beer consumption, the rate of employment in the beer industry is skyrocketing. This likely has to do with more workers being needed to produce a smaller amount of higher quality beer in craft breweries. As the article quips: “Goliaths are tumbling, Davids are ascendant, and beer is one of the unambiguously happy stories in the U.S. economy.”

Additionally, craft beer marketing In the United States is largely very successful at appealing to a slightly younger demographic. People in their twenties often don’t want to drink their dad’s beer. They’re more likely to experiment, and this gives craft beer makers a fighting chance in terms of moving in on the territory of brewing giants and establishing their own brand loyalty.

In fact, there is some speculation that craft beer marketing benefits from the figurative youth of the American beer industry. While many other countries have settled firmly into their beer-making traditions, the United States, much like its youth, still has space to experiment.

We are recognized in “Best Beer Branding Agencies” by DesignRush.